The Baring Foundation is celebrating its 50th anniversary…

We are marking the occasion with a short history of the Foundation told through 50 (of many hundreds) of grants.
Other

The Foundation was established fifty years ago on 25th March 1969 by leading members of Baring Bank. Since then, the Foundation has given over £120 million in grants.

As well as fifty representative grants from across the decades, which we hope give a sense of how our mission has been pursued over the years, the volume includes a Foreword by Lord Ashburton (formerly Sir John Baring), one of the seven founding members of the Foundation and also a Chair, and an Afterword by Janet Morrison, our current Chair.

It also includes six beautiful woodcuts by Hilary Paynter, one of the UK’s leading wood engravers who was one of the artists commissioned as part of the Arts and Older People programme’s ‘Late Style’ initiative in 2014. 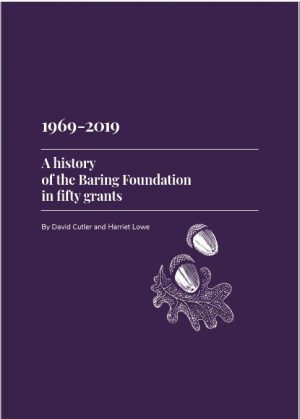 A short history of the Foundation told through 50 grants.

Find out more about the Baring Foundation, our mission, our people and our history.