A new report finds that the law can be a powerful tool for anti-racist campaigners and CSOs, but it can be harder to use in practice.
Strengthening Civil Society

The Baring Foundation has today published new research into how civil society campaigners and the lawyers that work with and for them – have used legal action to challenge racial injustice and bring about wider social change in the UK since 1990.

The Pursuit of Racial Justice through Legal Action is the first such overview of this issue and was researched and written by Dr Bharat Malkani, a Senior Lecturer at Cardiff University who has written widely on race and the law.

Overall, Dr Malkani concludes that the law can be a powerful tool for CSOs and their lawyers fighting racial injustice. However, he finds they have sometimes struggled to use it effectively for a range of reasons, including cuts to legal aid, the adversarial nature of legal processes which can exacerbate racial tensions; and that lawyers and those who work in civil society organisations are not necessarily trained to be anti-racist.

The report was commissioned as part of a focus by the Baring Foundation on racial justice including in its Strengthening Civil Society programme which supports the use of legal action by civil society to tackle discrimination and disadvantage.

You can also read a blog by Bharat Malkani on Justice Gap here. 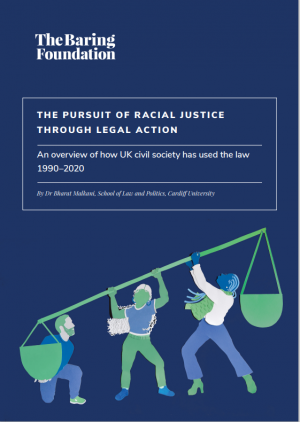 The pursuit of racial justice through legal action