Nick Capaldi, Arts Council Wales
Arts Council of Wales Chief Executive, Nick Capaldi, reflects on the value of challenging older people through their experience of, and engagement with, the arts.
Arts

In my younger years as a jobbing musician I did quite a bit of work for what was then called the Council for Music in Hospitals. Working with an actor friend (who had the most marvellous bass singing voice) we toured hospitals, secure facilities and care homes. Our programmes rarely strayed from the predictable – songs from the shows, standards from the war years, a few operatic lollipops, with usually Stanley Holloway’s “The Lion and Albert” chucked in for comic effect. Nothing too frightening. Yet one performance forced me to reappraise our whole approach.

Chatting to the audience after the performance was seen as an important part of the event. Usually one could rely on enthusiasm and praise. But on this occasion a small white‑haired lady said: “you play very nicely, dear, but you could have made us try harder”.

Chatting further to Margaret, it became immediately clear that I was in the presence of a singer of international quality and reputation. Not only had she sung in the first complete recording of Elgar’s “Dream of Gerontius”, but she’d also performed in the first production of Benjamin Britten’s “Peter Grimes”. Now frail and immobile, what mattered most to Margaret was that one aspect of her self that still remained sharp and alive – her creative imagination. And she was longing to exercise it.

What mattered most to Margaret was that one aspect of her self that still remained sharp and alive – her creative imagination.

It was a telling moment for me. Not only did I listen open‑mouthed to stories from the roll‑call of 20th century composers, musicians and conductors, but I realised what Margaret had been telling me. My approach that afternoon had been at best lazy and at worst patronising. Don’t get me wrong, I’m all in favour of popular arts and entertainment. But I shouldn’t assume a lowest common denominator. In this particular context, and with this ‘audience’, what greater impact could I have had if I’d thought more imaginatively about actively engaging the creativity of those we were performing to.

Thirty years later I’m pleased to say that practice has moved on. With the help and support of the Baring Foundation, Arts Council of Wales has been funding Age Cymru to develop “cARTrefu”, a flagship arts project in care homes across Wales. The project is all about improving access to quality arts experiences for older people in residential care, illuminating and invigorating their later lives. And by using expert artists with the skills to support, nurture, cajole and enable, some extraordinary results have been achieved.

And by using expert artists with the skills to support, nurture, cajole and enable, cARTrefu has achieved some extraordinary results.

Much of the work I see now is excellent, but not all of it. That’s fine – it’s bound to be so. I absolutely believe that while every person can be creative, this no more means that everyone’s an artist any more than we assume every physically active person is an athlete, every person to administer first aid is a surgeon, or every person to wield a screwdriver a master‑joiner. Not everyone engaged in creative activity will produce a work of genius.

Yet at its best, and where creativity is respected and valued, something profound and important can happen. Through their discipline, craft, skill and dedication, I’ve seen artists enable residents to feel more intensely, engage more meaningfully, and express more eloquently things that matter to them. I believe absolutely that the arts enable us to explore, not the easiest or most obvious parts of ourselves, but those best and deepest parts that retain that spark of who we are and how we want to be remembered. That, I know now, is what Margaret had been hoping for.

Case study of the cARTrefu programme which has brought artists into care homes across Wales. 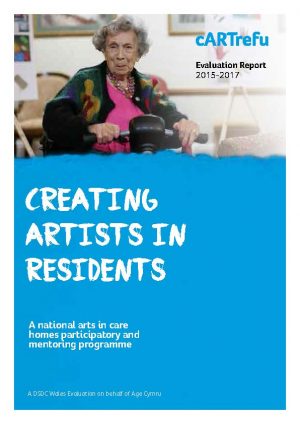 What’s behind the magnificent work taking place in arts with older people in Wales? Blog by David Cutler