Go West! Philanthropy’s role in supporting LGBTI rights in West Africa and beyond

This article was written for Alliance Magazine.

17 May is International Day Against Homophobia, Transphobia and Biphobia. LGBTI communities, activists and  campaigners will use it as a time to celebrate the progress of this fast moving civil rights movement that has seen real victories in recent years. More importantly, this is a day to mark the continuing impact of violence and discrimination against LGBTI people around the world.

In sub-Saharan Africa, where the Baring Foundation has worked for almost 50 years, the lived experience of LGBTI people is often marred by violence, familial rejection and state-sponsored discrimination. Colonial-era laws still criminalise sexual activity for many LGBTI Africans, whilst HIV/AIDS is an ongoing epidemic for the community.

However, this does little to capture the diversity of lived experiences for LGBTI people on the continent. The realities of life for a lesbian in Soweto will look vastly different to a gay man in Lagos or a trans woman in Gaborone. In South Africa, the legal framework for LGBTI people is among the best in the world, but LGBTI people – particularly lesbians – face violence in epidemic proportions. In Nigeria, the government has legislated against LGBTI people and has allowed mass arrests of those suspected of being gay.

We shifted our international development programme to focus on LGBTI civil society in sub-Saharan Africa three years ago, with a particular focus on LBQ women and trans people. Whilst the challenges facing LGBTI people in sub-Saharan Africa may seem daunting for a European private foundation, we believe that philanthropy has a key role to play. Three key things guide this belief:

However, this general increase in civil society activity is slower and more challenging in West Africa.  The 2015 report We Exist, which maps LGBTQ organising in the region, showed that civil society remains limited and the space for its activity is heavily restricted. This situation is particularly acute for LBQ women and trans people – very few groups were identified as working for these communities.

We are pleased to announce our first grants in West Africa for LBQ women and trans communities in May 2018. We will be supporting the development of a new regional grantmaker for anglophone and francophone West Africa – Initiative Sankofa D’Afrique De L’Ouest. We have also supported the work of Synergia to offer capacity building and financial support to emerging LBT groups in francophone West Africa.

The Baring Foundation runs its International Development programme from London, so we do not claim to speak for these communities or to share the challenges they face.  However, we do believe we can stand in solidarity with them and offer them resources to determine their own future. For philanthropy, that is surely what International Day Against Homophobia, Transphobia and Biphobia is all about. 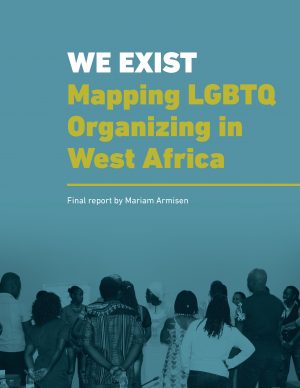