The stage is ageing – applause!

David Cutler
The Baring Foundation's Director, David Cutler, considers the growth in theatre for and by older people.
Arts

London’s theatre scene in recent months has been abuzz with high profile theatre by older people.

Visible has been performing Roundelay at the Southwark Playhouse, a riff on La Ronde about older people and sex with some circus thrown in. Seventeen at the Lyric Hammersmith cast older actors as teenagers (‘Older actors invest it with an extra layer of hope and sadness’). Not to mention Glenda Jackson’s triumphant gender-reversal return to the theatre as King Lear at the Old Vic at the end of last year (‘Not a last lap of honour, but the return of a great actor with more to give’). In terms of writers, Sir Tom Stoppard and Sir David Hare have both had recent hits in their seventies but for my money our greatest living playwright has to be Caryl Churchill. Now almost 80, she continues to experiment with new material on death, LGBTI rights in Africa and her recent piece, Escaped Alone.

Probably the most experimental was Improbable’s new piece at the National Theatre, Lost without Words. Recent discussion has highlighted the pressure on older actors to remember lines – but in Lost Without Words, classically trained actors were invited  to stand on stage with a completely different (even scarier!) challenge – improvisation. As the NT said: ‘No script, no map, a different show every night, all they ha(d) is a lifetime of theatre to help them find their way’. Watching it I was interested to see how different the references and choices of material were for an older company than a more typical performer in their twenties or thirties.

Watching the NT’s Lost without Words I was interested to see how different the references and choices of material were for an older company than a more typical performer in their twenties or thirties.

This is just some of the more prominent work in a great wave of exciting activity in the theatre with older people. Some of this we documented last year in A New Form of Theatre (which gives an overview of the theatre scene for and by older people and a useful directory of theatre companies and programmes). In September 2016, we followed this up with funding the UK’s first symposium for older people’s theatre companies which was held at the West Yorkshire Playhouse in Leeds.

Some theatres have formed professionally-led older people’s companies like Visible. We have identified over thirty, mostly quite new, and some of which we have funded like Entelechy in South London and Big Telly in Northern Ireland. The Royal Exchange in Manchester brought young performers and older performers together in its intergenerational The Space between Us project, a piece of physical theatre created jointly by the Theatre’s Elders Company and Young Company. Projects like this seem hugely important to counter intergenerational divisions, real and perceived.

We have identified over thirty, mostly  quite new professionally-led older people’s companies.

Then there has been a great increase in interest in how theatres can serve people living with dementia, not so different from the more common ‘relaxed’ performances at many theatres. This work has been pioneered by West Yorkshire Playhouse, which has compiled its experience and learning in a Dementia Friendly Performance Guide, with information from understanding the audience and show selection to selling the show and preparing the space. This came after more general guidance we pulled together for the Alzheimer’s Society on how to make arts venues age-friendly.

The Foundation has now gone further by co-funding with the Arts Council England, as part of our Celebrating Age programme, a Festival of Theatre which will explore the experience of living with dementia. Other grants under the same programme will also strengthen theatre work with older people, including at the New Vic Theatre in Stoke on Trent and a spectacular new show by artist Florence Peake on the lives and loves of older people which will tour Posh Clubs in Hastings, Brighton and Crawley.

Our Celebrating Age programme will strengthen theatre work with older people, including people living with dementia.

The stage is set for older people as never before.

David Cutler is Director of The Baring Foundation 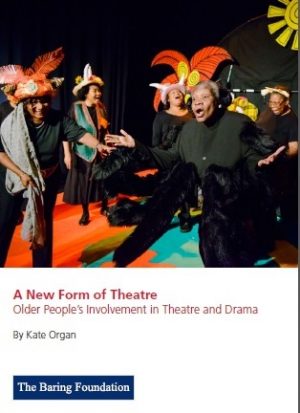 A new form of theatre: older people's involvement in theatre and drama