The role of local authorities and creative ageing

David Cutler
David Cutler introduces a new report on the contribution local authorities can make to ensuring that older people can age as creatively as they deserve.
Arts

‘It is the profound impact of the arts on the quality of older people’s lives, the meaning that it gives to their lives, that is perhaps of greatest relevance to local authorities. After all, isn’t improving the quality of life (and the quality of life chances) of its residents, the ultimate raison d’être of a local authority, and isn’t art in all its wondrous forms, together with a sense of purpose, ultimately what we stay alive for?’ That statement was written not by an artist or an Arts Officer in a local authority but by a doctor who is Public Health Director of London Borough.

Dr Danny Ruta’s powerful rallying cry comes at the start of our updated publication on local authorities, arts and older people. He has put money behind his sentiments as Lewisham Council has been funding a pioneering approach to the provision of day care activities for older people since 2013. Meet Me at the Albany is run by two arts organisations where 100 residents meet weekly to undertake creative activities led by artists and trained volunteers.

It is also highly significant that the National Institute for Health and Care Excellence (NICE) has lent its authoritative weight to this approach by stating in its guidance published in December 2015 that there is good evidence for the effectiveness of the arts in promoting the independence and well-being of older people.

Our report argues that local authorities are ideally placed to lead on arts and older people activity due to their unique combination of roles and responsibilities regarding: health and well-being; the arts and culture; older people’s services; social inclusion and community leadership.

Local authority structures, funding and responsibilities are increasingly different across the four nations but the report includes inspiring case studies from across the UK. For instance:

We are not oblivious to the immense financial pressures that Councils face which drive many to an increasingly narrow conception of core statutory duties. But the report demonstrates that quite small investments, often externally funded, but with the support of local authorities can have profound effects. 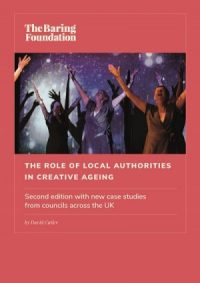 The role of local authorities in creative ageing