Strengthening the voice of older people through the arts

We are living longer than ever before. That’s something to be celebrated as a major achievement of improved health and social care services. An ageing population also, however, brings its own challenges; but older age, and particularly our perception of older age, should not be an obstacle to people living active and fulfilling lives.

Older age, and particularly our perception of older age, should not be an obstacle to people living active and fulfilling lives

As a response to the growing recognition that we, as a society, need to do more to support our older citizens, their families, friends and carers, the Arts Council of Northern Ireland introduced an Arts & Older People Programme. That was back in 2010. Since then, we, working in partnership with The Baring Foundation and the Public Health Agency for Northern Ireland, alongside the health and social care services and participating local arts organisations, have developed a wide range of projects designed to support social change through the arts. The groups participating in the programme have unlocked new ways of encouraging active ageing and lifelong learning, and new ways of challenging ageism and prejudice. They have also specifically targeted some of the root causes of poor wellbeing and mental health, such as poverty, isolation and loneliness.

There were other significant obstacles to overcome, including lack of disposable income, longstanding illness or disability, and a perception of the arts as ‘not for me’.

Our own research carried out in relation to the programme showed the scale of the challenge that lay ahead of us. For instance, 48 per cent of over-65s were not attending arts events and 80 per cent were not participating in any arts activity whatsoever. There were other significant obstacles to overcome, including lack of disposable income, longstanding illness or disability, and a perception of the arts as ‘not for me’.

Amongst the solutions we have offered is professional development for artists working with older people, and we now have artists trained specifically to work with people with dementia. Dementia is an increasing problem in an ageing society, but the arts hold a special key to unlocking memory and alleviating depression and anxiety in people living with the condition. We have also targeted identified gaps in existing provision, such as prioritising older men, who statistically are three-times less likely than women to engage with the arts. We involve older people in the planning process, to ensure that activities are tailored to their needs, and we’ve promoted and supported a multi-sectoral approach, so that greater sharing of knowledge and resources is encouraged and effective new partnerships and additional services can be delivered.

We work with a wide range of delivery partners, care providers, councils, health and care trusts and other related organisations in Northern Ireland, such as the Alzheimer’s Society, Age NI, Men’s Sheds and Norther Ireland Hospice. They have all seen their work uplifted and transformed by the creative inspiration of musicians, dancers, artists, circus performers and storytellers.

We work with a wide range of delivery partners, care providers, councils, health and care trusts.

Over the course of the last decade, the Arts & Older People Programme has supported more than 150 separate projects across Northern Ireland, and these have encouraged the participation of more than 22,500 older people in arts activities ranging from intergenerational storytelling to yarn bombing and even stilt walking. The range of creative activities is as varied, diverse and surprising as the people who are taking part in them. One of the main barriers for older people is stereotyping – they say you can’t teach an old dog new tricks, but that isn’t even true for dogs – so with our projects we have deliberately set out to challenge outdated and unhelpful perceptions of older people and what they might be interested in, or indeed capable of doing. The result, participants tell us, has been both liberating and empowering.

We have deliberately set out to challenge outdated and unhelpful perceptions of older people … The result, participants tell us, has been both liberating and empowering.

After taking part in the programme, over three-quarters of the participants told us they wanted more to do with the arts and that they had gained renewed confidence to try new things, with more than half going on to join new groups and activities. Much of this work with older people in Northern Ireland is pioneering, and all of this is proof indeed that the arts inspire creative ageing and bring positive new dimensions to the work of partners in the age, health and care professions.

A summary of some of the best of the work is to be found in the 2016 publication, ‘Not So Cut Off’. 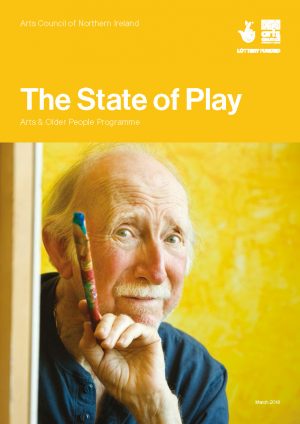 Not so cut off