The first two case studies in the Museum Association’s new publication Museums Change Lives are of work with older people, Tunbridge Wells Museum and Art Gallery’s Dementia Partnership and Glasgow Museums’ partnership with Contact the Elderly. In the former, Audience Development Manager Jeremy Kimmel puts his finger on something crucial: ‘Museums tap into curiosity, a quality so primal that it’s one of the last things to be affected by dementia’.

‘Museums tap into curiosity, a quality so primal that it’s one of the last things to be affected by dementia.’ 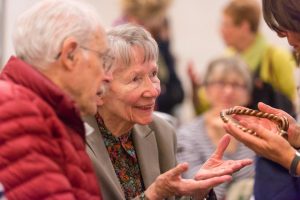 It is no surprise that so many museums do amazing work with older people on reminiscence. Just think of the enormous amount of work done by the National Museums Liverpool in its House of Memories, a training programme for carers, health and social providers to help them deliver positive experiences for people living with dementia. One of the main functions of museums is remembering and it is moving that staff are so concerned about working with people whose memories have become more fragile than the rest of ours.

But none of us are just our past, and museums and galleries have so much more to offer by using objects as the spurs to our curiosity and creativity. I vividly recall going to one of the excellent InMind ‘Art, coffee and conversation’ sessions at the Royal Academy for people living with dementia in the community and their carers. Waiting for the session I met a participant who was anxious and could not remember where she lived. Once in the session, expertly run by the RA’s educators and which was simply an appreciation of a 20th century painting, she was transformed and one of the most animated people in the room. The Meet Me at the MOMA programme has inspired many galleries in particular to have such programmes, for instance National Museums Scotland.

‘Museums and galleries have so much to offer by using objects as the spurs to our curiosity and creativity.’

Museums and galleries with collections are also a central to civilised life in this country by uniquely offering beautiful and free civic spaces. So it is vital that these are truly accessible to everyone. This is why we worked with the Museum’s Association and others in 2015 for the Alzheimer’s Society to publish the Becoming a dementia-friendly arts venue: a practical guide.

We have a vast and rich array of museums in the UK which means that most people will have one quite close to them but also that their range allows everyone to find something that engages them. This is useful in attracting older men, who tend to be less involved in the arts, which is why we commissioned Ed Watts at the Whitworth Gallery to write a Handbook for engagement for cultural engagement with older men.

Of course not everyone is able to visit in person even if it is free and that is true of many people living in care homes. Museums and galleries are doing a huge amount to digitise their work; however, there are particular challenges to making this new treasure trove available in care homes which is why we have jointly funded with the Nominet Trust City Arts in Nottingham to further develop their Armchair Gallery which has begun with a superb tour of Chatsworth House.

‘We have jointly funded with the Nominet Trust City Arts in Nottingham to further develop their Armchair Gallery.’

All of which is why the Foundation has been proud as part of our Arts and Older People programme to fund the Age Friendly Museum’s Network. It began in 2012 and resulted in a Manifesto for Age-Friendly Museums. It continues as a national partnership, led and hosted by the British Museum but with very active involvement across the country from 900 members. It is free for museums or others (for instance older people’s organisations) to join. It runs free workshops and training and provides a very useful round-up of activity and opportunities in its newsletter, which will for example include information on the next open round for applications for our joint fund with the Arts Council England called Celebrating Age, which can support museums to be more age-friendly. Among the grants made this year, among others, we have supported Wolverhampton Art Gallery and Mima.

‘The Age-Friendly Museum is free for museums or others – for instance older people’s organisations – to join.’

We have an inspirational Museum of Childhood – what would we put in a Museum of Old Age?

David Cutler is Director of the Baring Foundation