Postcard from Finland: the old couple

David Cutler
On the wonderful creative and cultural opportunities for older people in Finland at the start of its first creative ageing festival, Armas.
Arts

I had the huge privilege of participating in the launch of Armas, the new national creative ageing festival in Finland on 1st October. This is part of Finland’s official celebration of its centenary of independence. It was a wonderful event with an older people’s brass band, dramatic poetry from a senior’s group and Muska Babitzin, who is known  as Finland’s pensioner equivalent of Suzi Quatro. She certainly rocked the crowd.

Armas (hard to translate, but roughly an affectionate or tender term for a man, perhaps ‘darling’) is the hard-won creation of Raisa Karttunen who works for the Cable Factory in Helsinki. I am delighted to say she drew inspiration from Scotland’s Luminate festival which we fund and helped establish and which itself is based on Ireland’s Bealtaine. The exchange has been mutual of course and Luminate has played host to Finland’s self-styled Rock Grannies Riskiryhmä (‘Risky Business’).

The festival takes place over two weeks with a huge variety of around 250 events. There will be a beer tasting session combined with the music of The Beatles, guided tours of the National Art Gallery by current and retired staff, a photography project at the iconic Finlandia Hall curated by people living in a care home, and a performance by an older people’s choir organised by the Miina Sillanpää Foundation which provides services for older people.

Being in Helsinki brought back memories of the inspiring work I saw there in 2013 (Colder, Older and Wiser) where I learnt about an EU programme giving artists opportunities  to work with older people in four Finnish cities and saw the impressive Comprehensive Service Centres of Kinapori and Roihuvuori where numerous services are co-located with care homes.

Since then, although Finland has not been immune to the pressures of public funding cuts, there has been further progress in creative ageing. A structural strength of the system in Helsinki is a post held by Jenni Räsänen for the last eight years which is jointly funded by the arts and culture and health and social care departments. This has achieved many things, including developing and professionalising the role of Activity Coordinators in care homes (renamed Cultural Coordinators) who now benefit from regular workshops and training across the City. There is now a National Network of Arts-based Elderly Care comprising 13 cities across Finland called Aili (an affectionate name for a woman, making the ‘Old Couple of Armas and Aili’). This infrastructure is underpinned by a strong philosophy of cultural rights – that we all have a human right to access culture and be creative.

I was very interested to hear of the many activities led by the Helsinki Music Centre, the magnificent new concert hall, which is home to two of Finland’s thirty orchestras. Groups of musicians regularly go to play in care homes on a voluntary basis. Concerts are sometimes streamed into care homes and they are frequently put online for a limited period to play again. Rehearsals for concerts (without singers) are often held during the day with the public able to attend for a small fee of three euros. Many of the 400 places are taken by older people. The Music House takes part in Helsinki’s wonderful Cultural Companion project which enables 100 volunteers to take someone who contacts the City Hall to a cultural event at very low cost. Although this isn’t age-specific, most of the seats are again taken by older people.

Creative ageing in Finland is thriving. Armas is a major addition to the growing movement of arts and older people activity around the world. 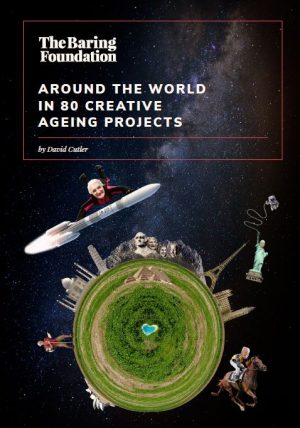 Inspiring projects and organisations from Ireland to Japan.