Over the past four years Jacksons Lane has developed a participation and outreach department that has increased our engagement across North London in areas such as Tottenham, Wood Green and part of Barnet. We have achieved lots with young people however a big focus of the work has been with older people. This has been an amazing and positive learning experience for us too.

We wanted older people to be a part of our building and engage with Jacksons Lane. We had two fitness classes running at Jacksons Lane and we wanted to build on this to create a real relationship. However I must confess at this time I had no experience in arts participation with older people and the only previous real project Jacksons Lane had conceived was a discontinued lunch club that finished due to cuts.

I started by talking to anyone I could find that had been a part of the lunch club. In my conversations I learned that the lunch club was very much appreciated however there was a feeling that it could have been more of an event with people feeling they wanted to have fun. 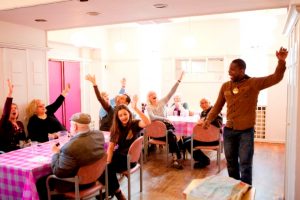 “Fun” was a word I could tap into. So we went about a lunch event with lots of entertainment. For this we pulled on all our theatre’s resources including young circus artists from our artistic programme and contacts from West End musicals. From there we created a kind of dinner theatre experience and it worked. Although I do remember the first one was far from perfect- I still remember running around with plates of food not knowing what I was doing when I suddenly realised I had opened a restaurant! However older people started to attend on a regular basis and I was delighted that they were coming from across the borough liaising with scheme managers to arrange their own public transport. As one participant said “It has made me want to do more to come and enjoy myself also to meet people”.

Because of this project we built up many partnerships that enabled us to expand on this work. Our main one being Homes for Haringey where we have managed to tour our lunches to their supported housing schemes under the name of “Broadway Brunch.” We have bought theatre companies such as Theatre Re and Little Soldier out to schemes to perform from their plays, circus artists from the National Centre for Circus Arts have been seen hula hooping in schemes and they have also enjoyed top quality singing from West End cast members from shows such as The Lion King and Made In Dagenham.

We have also built up our body of work through these partnerships. We have a volunteer led project called Coffee and Computers which gives older people increased confidence with IT and the chance to meet people over a drink. This has now grown beyond Jacksons Lane to Highgate School, local libraries and we are working with volunteers and organisations like Neighbourhood Connect to bring this to Wood Green. We also have regular reminiscence workshops with older people based on a famous show which features a desert island and we have also worked with Age UK London and Haringey to produce forum theatre pieces to raise awareness and discussion around older people’s issues. This has seen us bring theatre practitioners together with volunteer older actors to create theatre based on issues such as mental health, changes in health services and isolation. The theatre produced has been discussed with groups such as the Haringey Forum for Older People’s regular meetings where over 70 older people debate the play.

Rather naively I thought we were being unique in our work with older people – remember it’s not something we had any experience of. However after some very useful conversations with the Baring Foundation we soon learned that there were many arts providers doing so much more and pretty amazing things too. So the Baring Foundation set us a task. Find out how arts venues can be more age friendly and can this work be more sustainable.

Our research has led us to engage with some fantastic organisations and has truly been an inspirational learning experience. Our findings and journey can be seen in a report that will soon follow this blog post. I do hope you get the chance to have a look. We have spoken to some brilliant people; Anne Colvin a dance practitioner’s advice about taking a person centred approach was so clear and a moment of enlightenment. The passion of everybody who contributes to Meet Me at the Albany will not be forgotten and hearing from one participant how the project had unlocked a creativity that had been forbidden as a child was very moving. The Southwark Playhouse Elder’s Company was joyous and it was a delight to not only take part in their workshop but see their wonderful performance on stage at Southwark Playhouse.

So what did we learn? Well lots so read the report to find out but what I can say is that there is so much passion from many people to see growth in arts and older people. Reflecting on the experience and talking to people about it, we feel that there is a more coming together and sharing that could be done, there needs to be a lot of work on creating relationships with health professionals to evidence the benefits of the arts and venues succeed when older people are included right at the heart of the work.

As for us we realise we are just beginning our journey but thanks to our Baring Foundation research and the new contacts we have made we are moving ahead with much more confidence. That can only be good for the older people we work at Jacksons Lane. Oh and we are not forgetting to make the work fun!

Views expressed in this post do not necessarily reflect those of the Baring Foundation.