David Cutler
This new Directory includes around 250 - mainly arts - organisations working in arts and mental health. David Cutler explains how it started and what it includes.
Arts

When we decided that we wanted to support creative activities with people with mental health problems, it was obvious to us that we needed to find out a lot more about what was happening. There didn’t seem to be one place to get a good overview and hence we published our first report, Creatively Minded, in February 2020. At the end of Creatively Minded, we included an appendix of the organisations we had encountered that were running recent creative activities with people with mental health problems. This appendix included 170 organisations. Since then we have come into contact with a further 80 organisations which we have integrated into the original list to create this Directory.

What we have discovered  is a treasure trove of inspiring work which deserves to be better known.

Everything about creativity and people with mental health problems is difficult to define and there is rarely consensus around appropriate language or definitions.

In this directory we include organisations, usually arts organisations, that work creatively with people with mental health problems. We understand that some people and organisations may avoid this term but simply observe that it is probably the most commonly used phrase. We are not including organisations that work with the entire community and see creativity as positive for everyone’s wellbeing and mental health. Creative Arts Therapies are a highly professional and separate discipline and lie outside the scope of the Directory, as do, by and large, work by mental health charities or NHS organisations.

There are many organisations that work with people who are at higher risk of mental health problems, for example prisoners, homeless people, refugees and people seeking asylum, people with learning disabilities and many others. A number of these groups have umbrella organisations such as the National Criminal Justice Arts Alliance and have their own directories. It is hard to be consistent here but where organisations emphasise their particular focus on mental health problems and trauma they have been included.

Finally, the Baring Foundation has for a long time funded ‘participatory arts’. This is where a trained or highly experienced artist works with people who have not had her or his training in a highly facilitative way. This may sometimes be called co-production but is always putting these skills at the service of the participants in a project or programme. We recognise that there are many other ways of working too, including an enormous number of voluntary arts organisations.

First of all, we know this Directory is not complete – we hope to update it periodically as we know we will have missed out many great organisations. Please do get in touch with us if you would like to be added in the future by emailing: baring.foundation@ing.com

There is a wide range of arts forms addressed in the Directory. Visual arts and creative writing are probably the most well represented. A large number of  organisations are multi art-form.

Many organisations have told us that the motivation for starting up was the personal experience of the founder, or a family member, of living with mental health problems.

The majority of the organisations listed here have small budgets. When we made a round of 87 grants to specialist arts and mental health organisations in September 2020, around half of which had budgets under £100k per annum and a quarter under £30k. Therefore, most organisations are small-scale, often offering a few workshops per week to groups of around a dozen people who have often used their services for a long time and who they have grown to know very well.

Despite surviving on a shoe string, some organisations have been working since the 1980s. Others have sprung up in the last few years.

Lastly, for all the obvious limitations of this Directory, we still hope that is of some use. We haven’t come across anything that covers the same ground. It has been repeated to us many times that people would love to learn more about what is happening elsewhere  and exchange practice. Two things are stopping them. The most important of these is capacity. The second is a map to guide them. We hope that our funding helps with the former and this of some help with the latter. 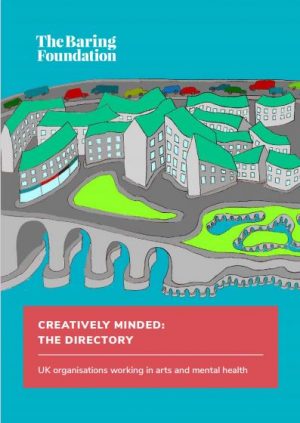 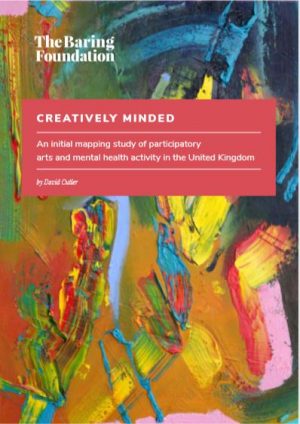