Independence in Question: the voluntary sector in 2016

The report documents a wide range of challenges – including continuing concerns about the impact of the so-called Lobbying Act, the negative impact of the current statutory funding regime and threats to independent regulation. But two stand out over the last 12 months.

First, the new ‘no advocacy’ clauses in all taxpayer-funded grants announced in February 2016.   The change will particularly affect organisations that have limited or no resources for policy work without government funding. More widely, it will fuel self-censorship because of the growing impression that advocacy work is not welcome.  The impact on society is even greater.  The input of grass root and expert voluntary organisations into public policy and services and wider democratic debate ensures all voices in society can be heard and that role is even more important at a time of massive changes in services and benefits. These and other restrictions to the voice of the sector also leave an unhealthy imbalance between community, private sector and state power.

The second ‘stand out’ issue over the last 12 months is the recent wave of controversies around charity operations – including poor fund raising practices and the alleged selling of inappropriate commercial products – which has left the rest of the sector more vulnerable to attack and proves the need for some larger organisations to make sure they are being true to their independent, charitable purpose in everything they do.

Across the board, we are seeing an erosion of respect for the distinctive value of an independent voluntary sector. One reason is that, as more public services have been contracted out, successive governments have begun to treat the voluntary sector like an arm of the state and also encouraged it to become more business-like in order to compete on equal terms with the private sector.  It’s now commonplace for the third sector to justify its importance in terms of its turnover and the numbers of people it employs, rather than through its connection to diverse communities, its expert knowledge, its independent voice.  And yet that’s where the unique power of the third sector lies and is the very source of its independence.

Instead, the voluntary sector is increasingly being characterised by others as a vested interest, rather than a source of independent knowledge and expertise. The voluntary sector must develop and project a more self-confident narrative about its role in society, the report concludes, engaging all parts of the sector and wider stakeholders in this process. The starting point should be not the status quo but how the voluntary sector could be even better at carrying out its independent role.

As Maurice Wren, the Chief Executive of the Refugee Council, said at the launch of the report at The Baring Foundation, the sector needs to ‘invert the triangle’ and engage more with the communities its serves and draw on the independent sources of power that they bring.

Caroline Slocock is the Director of Civil Exchange and principal author of Independence in Question: the voluntary sector in 2016.

Views expressed in this post do not necessarily reflect those of the Baring Foundation. 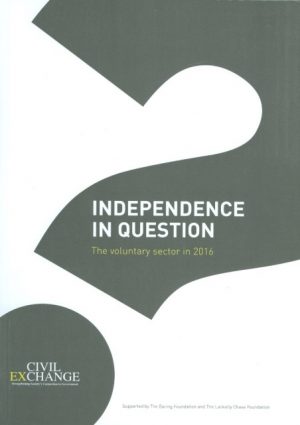 Independence in question: the voluntary sector in 2016