How to use the law for social change 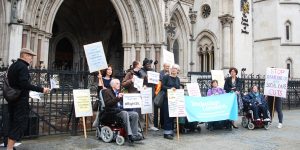 The ‘law’ can mean many things; from drafting legislation, proper implementation of existing legislation to litigating in courts. Some organisations may be wary of going to court, but when used carefully litigation can play a key role in helping achieve their aims.

To get more NGOs in this country to consider litigation as a tool for change, Joseph Rowntree Charitable Trust and Paul Hamlyn Foundation commissioned separate reports evaluating two instances where litigation was used successfully by NGOs which brought about significant change.

The first report prepared by IVAR focuses on strategic litigation by Detention Action, a small, non-legal NGO. Detention Action took legal action over the Detained Fast Track (DFT), a process where asylum seekers were routinely detained in high security centres while waiting for their claims to be decided. Detention Action and its legal team brought a series of challenges that took several years, culminating in the Supreme Court upholding a Court of Appeal decision that the DFT was ‘systematically unfair’.

The second report prepared by Dr Vanhala of UCL looked at Just for Kids Law’s intervention in R v Tigere in the Supreme Court. The case was about the denial of student loans to lawfully resident young people who were not British citizens. The findings were similar to the IVAR report, concluding that:

Dr Vanhala had previously been commissioned by the Baring Foundation to write a report on Successful use of Strategic Litigation by the Voluntary Sector on Issues Related to Discrimination and Disadvantage. There have also been reports commissioned reviewing strategic litigation in other jurisdictions. In 2013, Atlantic Philanthropy analysed what successful public interest litigation might look like, building on lessons it had learned with 20 years experience in South Africa. Atlantic concluded that while litigation is a useful tool in bringing about social change, it is most effective when used in conjunction with other social change tools rather than in isolation; including the support of key communities, public education, media coverage, political lobbying and policy reform.

We hope that these reports are a useful starting point for NGOs and lawyers in the UK who are considering becoming involved in using the law to bring about social change.

This blog was first published on the website of Just for Kids Law. Find out more about their work.

Photo: Strengthening the Voluntary Sector grantholder, Inclusion London, intervened in the first case about The Care Act 2014 to reach the Court of Appeal earlier this year.

In the spotlight interview: Chris at Unlock

Chris Stacey and Unlock have recently turned to the law to help people with convictions rebuild their lives.

10 examples from the UK of successful strategic litigation

In the spotlight interview: Joeli at Pregnant then Screwed

Joeli set up Pregnant then Screwed to campaign against the motherhood penalty.