Getting the law habit: Transforming Lives

Lots of campaigners and change-makers are aware that the law should be in their arsenal, but say they don’t know enough to get started or even ask the right questions. This collection beautifully illustrates what’s possible, offering a rich and varied set of stories about how organisations have used the law to secure change in a variety of ways. Importantly, it shows that it doesn’t need to be all about high-cost, high-stake courtroom drama.

The report draws five conclusions, but I thought I would share the characteristics and approaches that jumped out at me as I read it, and that any civil society organisation should think about if it believes it needs to get ‘law ready’.

This aligns with the first of SMK’s 12 Habits of Effective Change-Makers – mission first, not model or money. It’s about the ability to know what you’re striving to achieve and to keep your eye on the prize.

Mission first, not model or money.

In 2018, Unlock decided to intervene in a Supreme Court case when the Government decided to appeal a decision that the UK’s system of requiring people to disclose past offences breached the European Convention on Human Rights. Despite some improvements to the system in 2013, Unlock knew it did not go far enough. So, I was struck that Unlock had actually invested resources since 2013 in collecting examples of people not benefiting from the new system.

As a result of its long-term view, its focus on mission, it was ready in 2018 when the appeal occurred. And, when it did so, Christopher Stacey, co-director of Unlock, said “it made sense to intervene because the issues in the case are core to the mission of what Unlock is trying to achieve”.

This aligns with our twelfth habit – taking responsible risks. Lots of organisations shy away from using the law, fearing that the risk is too high. The organisations in Transforming Lives recognise the risk of not acting. By taking sensible steps to be prepared (see below) they turn it into a responsible risk.

By taking sensible steps to be prepared, they turn it into a responsible risk.

This needs to be done consciously and with eyes open to the potential pitfalls. However, both Birthrights and Friends of the Earth Northern Ireland decided that legal action, where required, was something they are prepared to step into. For Friends of the Earth, bold action is very much part of their brand, so it is something both their supporters and the public want and expect. The environment for Birthrights was cooler, with some ally organisations reluctant to be associated with legal action. However, Birthrights say they “were always quite clear that we would use legal action if we needed to create change” and that they “wouldn’t be put off by backlash.”

It can take time to be ready to spring into action, and this is the third of our 12 Habits – being adaptive and responsive. Many change-makers report to us the difficulty of working within restrictive organisational processes that presume change occurs in linear progression. In reality it’s messy, complicated and often given momentum by unexpected opportunities.

Having a trustee with professional experience of public law meant that Unlock could have “ongoing understanding” of the risks and opportunities of legal intervention. This enabled it to consider the Government’s appeal and make a relatively swift and informed decision to act.

The ninth habit is ‘collaborating not competing’, and there are numerous examples of collaboration to choose from in this publication (which is heartening).

The Legal Network, supported by Mencap, brings together organisations that support people with learning disabilities, their families and carers with lawyers who have expertise in community care. The truly transformational potential of this project lies in its focus on data analysis, which allows it to identify breaches of human rights and geographic hot spots in terms of failures in social care provision. This is used to challenge public bodies that are failing to meet their statutory duties.

Just for Kids Law worked with student lawyers at the UCL Centre for Access to Justice to support a landmark case to secure higher education for young migrants. The same partnership also built strong relationships between young lawyers and campaigners, boosting young people’s activism and action to secure their own individual rights.

For Clan Childlaw, who secured stronger sibling rights for looked-after children in Scotland, their coalition gave them access to the skills, knowledge and strengths of other organisations. They particularly noted how crucial it was for other organisations to bring “the power of storytelling” into the campaign, which Clan may not have been able to do for its own clients while they were involved in legal casework.

The second of the 12 Habits is ‘looking at the bigger picture’, essentially taking a ‘whole system’ approach. This recognises that one change in isolation (such as a new law or policy) rarely transforms – that the system needs to change across its many parts.

Some of the most successful organisations using the law to drive social change recognise that getting to a verdict is just one step on the road. JustRight Scotland and the Equality & Human Rights Commission (EHRC) knew this and, when a case found that refugee spouses fleeing domestic violence should be treated equally to anyone else, they realised it would take more than a court decision to change Home Office rules. It took two more years of concerted lobbying and campaigning before the Government expanded the domestic violence rules to the spouses of refugees in compliance with the judgment.

The tenth of the 12 Habits is ‘knowing our tools’, but in this case I think it also applies to sharing them.

The project by the British Red Cross, organisations serving migrants and law firm Deighton Pierce Glynn to share knowledge of migrant rights and the tools to enforce them was inspiring. Lawyers’ own power derives from their expertise, so helping non-lawyers to use Pre-Action Protocol (PAP) letters was an important example of inviting people to take your power for the greater good.

Lawyers’ power derives from their expertise, so helping non-lawyers to use Pre-Action Protocol (PAP) letters was an important example of inviting people to take your power for the greater good.

So, if you’re pondering whether and how your organisation might use the law to secure change, the examples in Transforming Lives are a great way to start conversations with your board, your staff and the people you work with. You might also take a look at the Sheila McKechnie Foundation’s Using the Law for Campaigning & Social Change: a 101 guide (sponsored by the Baring Foundation).

Chloe Hardy is Director of Policy and Communications at the Sheila McKechnie Foundation, which is dedicated to unlocking civil society’s power to change the world. 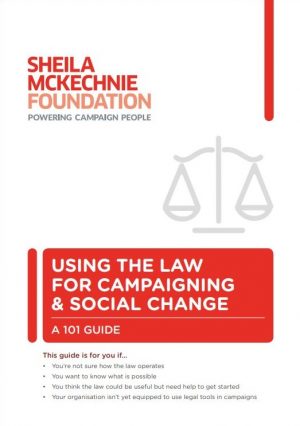