David Sampson
The law can be a powerful tool for change across the voluntary sector and across issues, and not just for those who see themselves as 'legal charities'.
Strengthening Civil Society

This blog was first published in Third Sector online.

On 22 June 1772, Lord Mansfield delivered his judgment in Somerset v Stewart, which effectively declared slavery unlawful in England and Wales. It was the culmination of five years of legal action by Granville Sharp, who had no legal training when he first appeared in court in 1767 to defend the rights of a black slave kidnapped in London. These events transformed Granville Sharp into a legal expert and prominent abolitionist. Somerset v Stewart could be viewed as the beginning of the end of slavery in the British Empire.

Kinship Carers Liverpool would not have seen itself as a legal organisation primarily. However, it has just finished a year-long project that drew on legal expertise to help kinship families know their rights, working constructively with Liverpool Council staff to develop an understanding of issues affecting kin carers within the broader human rights context and to develop a joint action plan to improve policies and services affecting these families.

The Edinburgh Tenants Federation, which provides a voice for tenants across the city, is another non-legal charity that has found a legal approach effective. It has been working with the Belfast-based charity Participation and the Practice of Rights to help social housing tenants use international law to campaign for improvements to their homes. The results have been striking and tangible, with tenants securing £3m of investment for refurbishments to the blocks.

Empowering front-line workers with legal knowledge can be a powerful way of heading off unfair treatment at an early stage. The Public Law Project, which assists good causes by providing them with specialist lawyers, is training mental health and homelessness workers on how to challenge unreasonable job search requirements, which often result in painful benefit sanctioning.

PLP is, of course, an expert in the law, and it is using this work with front-line workers as a way to identify potential systemic issues that could be challengeable with more direct legal action. Many other expert civil society organisations are providing legal advice and using the law to achieve important victories. The successful challenge to the Department for Work and Pension’s cap on PIP payments for people with mental health support needs by PLP, with support from Inclusion London, Mind and others, was widely covered in the media and demonstrates the value of collaboration across the sector.

There are many other examples of the voluntary sector successfully challenging policy in different areas, including climate change, children’s rights and immigration, to name but a few. We think these organisations need more capacity to do their work and to collaborate with broader civil society in campaigns of social change. This autumn we are running a new funding round of the Strengthening the Voluntary Sector programme to support this important work.

It took five years for Granville Sharp to win a resounding victory for slaves in England and Wales. It was another 35 years before the slave trade was abolished within the British Empire, and slavery itself was not abolished totally until 1833. Social change is often a slow burn, but legal action can certainly add some fireworks.

David Sampson is the deputy director of the Baring Foundation and runs the Strengthening the Voluntary Sector programme, a joint initiative with the Esmée Fairbairn Foundation and the Legal Education Foundation 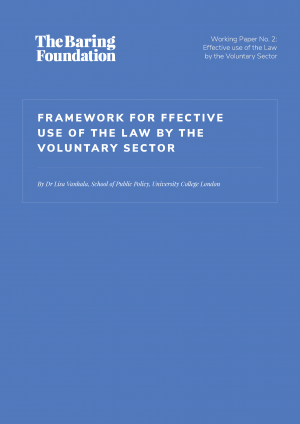 Framework for effective use of the law

A typology the use of the law and for types of voluntary sector organisation using the law.