David Cutler
David Cutler reflects on the importance of photography as an art form for creative ageing and its representation in our grant portfolio and beyond.
Arts

I have just been to see the Don McCullin exhibition at Tate Britain. It was packed with people of all ages paying homage to a genius. As you will see if you watch the BBC’s documentary, McCullin is energetically recording a unique and powerful account of Britain today. He says that photography gives him purpose at the age of 83 and gets him out of his house. The exhibition demonstrates he is one of the greatest photographers who has ever lived, bringing compassion to every picture, often to children and people in extremis. For over 60 years he has been compelling us to look, often when we wish we could look away.

He is one of a group of amazing older photographers. A personal favourite for me is the youngster Vanley Burke, at 68 ‘the Godfather of Black British Photography’ (listen to him on Desert Island Discs), but one might also mention Sabine Weiss working in her nineties in Paris or of the same vintage, American Tony Vaccero. And David Bailey also has a new show on in London.

These giants made me reflect on how significant photography as an art form is for creative ageing and its representation in our portfolio and beyond.

We have funded a number of arts organisations to commission photographers to work with older people. Sometimes it has been to  produce portraits of intimacy and dignity such as Stuart Whipps’ work for the Ikon Gallery with the John Taylor Hospice in Birmingham. Other examples have been work by B3 Media with the Black community in Peckham, or Talking Birds in Coventry. Often the work has gone beyond the photographic portrait to record a life story too.

Photography is a wonderful medium for transferring skills. Ed Watts at the Whitworth Gallery (a photographer himself) points out that men, who are notably under-represented in general in creative ageing, are sometimes lured in by more technical art forms, be it iron working or digital photography. In Glasgow, Impact Arts has been running the Craft Café and participants produced an exhibition called ‘Beautiful Govan’. A wonderful example of intergenerational exchange happened at the FOAM photography museum in Amsterdam where older and younger residents jointly photographed and interpreted their environment together for an exhibition called Twee Keer Kijk – Looking Twice.

Cameras are now of course more frequently a feature of phones or tablets and merge into a multitude of digital creative possibilities as shown in iPad Engage or the Armchair Gallery App developed by City Arts Nottingham.

Photography is such a flexible and accessible artistic medium. It is often used as a trigger for reminiscence, for instance by Lakeside Arts. But it can also be a prompt for creative writing as happens with Timeslips, developed in the USA but now widely used in care homes, for instance by Equal Arts. In Northern Ireland, Age NI worked with 15 volunteers to produce a themed exhibition called Hidden Voices and in Scotland, Luminate has organised photography challenges around themes as part of their national festivals.

Finally, cARTrefu – the programme of artists’ residencies run by Age Cymru – has used photography to joyful and uplifting effect in care homes in Wales. Photographer Michal Iwanowski has asked residents to give him their dreams for themselves from which he makes witty photo-shopped collages with them. Movingly, he worked with a care home resident who had lost her young husband on the last day of the war in Europe in 1945 and had never visited his grave. She realised that now she never could. Michal found a picture of the actual grave through social media and added the man’s photograph in uniform to the image as a gift for her. I always cry when I think of that story. Participatory art can be an also be act of love as well as creativity. 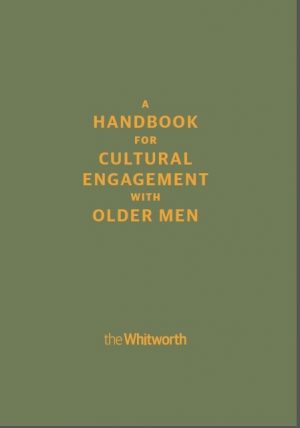 A handbook for cultural engagement with older men

Advice on the perennial problem of involving older men which many arts organisations have found challenging. 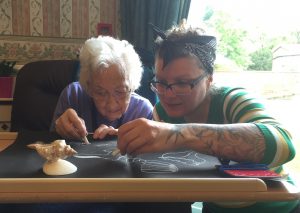 More about the cARTrefu programme