Janet Cormack, Clan Childlaw
The law is being strengthened in Scotland to give UN treaty rights effect in Scots law in a landmark move for children’s human rights accountability. Janet sets out what this will mean for children and the organisations that support them.
Strengthening Civil Society

The rights set out in the United Nations Children’s Rights Convention (UNCRC) are due to have legal force in Scotland later this year thanks to a long campaign which culminated in a  Bill being passed unanimously by the Scottish Parliament in March.

Although the UK signed the UNCRC in 1991, it has had limited impact, as it is not directly applicable, and whilst many of the rights it contains are protected through the Human Rights Act and other statutes, other rights enjoy far less direct legal protection.

Alongside incorporation of the UNCRC, the Scottish Government is committed to a new rights framework based on the recommendations of the First Minister’s Advisory Group on Human Rights Leadership which will incorporate four more international treaties (on Economic, Social and Cultural Rights, Discrimination against Women, Racial Discrimination, and the Rights of Persons with Disabilities) and add new rights for older people, LGBTI people and the right to a healthy environment.

The UNCRC sets out the rights to which children under 18 are entitled in all areas of their lives and recognises that especially vulnerable children, including care experienced children, migrant children and children with disabilities, require particular protection.

Incorporating the UNCRC in Scotland will give the full range of rights it contains legal force akin to European Convention on Human Rights (ECHR) rights. The mechanisms for enforcing UNCRC rights will be similar to those in the Human Rights Act, with public authorities under a duty not to act incompatibly with the UNCRC.

What it means for children’s legal action

Where authorities do not meet UNCRC requirements, children and young people will be able to take legal action to hold them to account. Of course children’s rights are already applied every day by courts, tribunals and Children’s Hearings (which make decisions on children’s care and protection) – but enforceable UNCRC rights will bring new scope and depth to children’s legal rights.

When representing clients, Clan Childlaw’s solicitors will be able to bring new arguments based on the UNCRC. When reaching their judgments, courts will be able to take into account the UN Committee on the Rights of the Child’s detailed guidance, comments and recommendations.

There’s a lot of scope for using the new legislation to improve outcomes for some of our most vulnerable children and young people, for example through strategic litigation based on the right to an adequate standard of living (Article 27 UNCRC) or to good physical and mental health care (Article 24 UNCRC).

Legal action will be able to be brought against public authorities by the child themselves, by another person or organisation with sufficient interest (in contrast to ECHR challenges which must be brought by the victim of the rights breach), and by the Children and Young People Commissioner or the Scottish Human Rights Commission which both receive new powers.

The Bill prioritises the creation of a rights culture by placing pro-active duties on Ministers and public authorities.

The Scottish Government must publish a ‘Children’s Rights Scheme’ to show how it is meeting UNCRC requirements and how they plan to progress children’s rights. Public authorities must report on what they are doing to meet UNCRC requirements.

Ministers must carry out children’s rights impact assessments for all new legislation and make a statement on the compatibility of any proposed laws with the UNCRC.

All legislation must be read and given effect in a way that is compatible with the incorporated UNCRC requirements, so far as it is possible to do so.

Maximalist incorporation – but within the limits of devolution

By directly reproducing UNCRC rights in an Act of the Scottish Parliament, the Bill takes a maximalist approach.

The rights will only be applicable in devolved areas of life, though this covers most public services impacting children such as health, education, social care and criminal justice. It cannot apply in areas reserved to the UK, notably immigration, asylum, citizenship and the armed forces. For this reason, UNCRC articles relating to those areas do not appear in the Bill.

And while the Bill will bind all public authorities in Scotland, including the Scottish Government, Scottish courts and tribunals and public bodies, it cannot bind UK authorities.

The Bill has been paused for now because the UK Government has challenged specific provisions of the Bill which it views as impinging on the power of the UK Parliament to make laws for Scotland. It has asked the Supreme Court to rule on whether the Scottish Parliament acted beyond its powers under the devolution settlement. The case will be heard on 28 and 29 June (see details here). If sections of the Bill are found in breach of the devolution settlement, the Bill will need to be amended before it can enter into force, but it is not expected to affect its main components.

Great anticipation and excitement has accompanied the passage of the UNCRC Bill. Knowledge of children’s rights is increasing and authorities are gearing up for their new legal duties.

As ever, implementation of this new law in practice will be key. It will be a really important new tool for improving children’s lives which we look forward to using.

Clan Childlaw is Scotland’s law centre for children and young people. We aim to protect and strengthen children’s rights and improve their lives. Our work to use the law and strategic litigation to advance children’s rights in Scotland has benefitted enormously from The Baring Foundation Strengthening Civil Society programme. 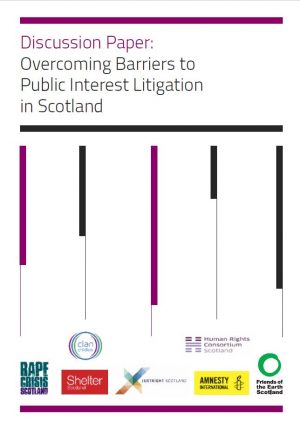