Exploring social isolation through art in the older Chinese community

Combating social isolation is an organic process that you can’t solve with a single action or activity; it starts with building trusted and meaningful relationships with others.

When I started my role as Director of the Centre for Chinese Contemporary Art (CFCCA) in 2014, I imagined the organisation would be firmly rooted within its local Chinese community. Built as the Chinese View Arts Association on an ethos of fostering community cohesion between the UK and Chinese community in the early 1980s, this wasn’t an unreasonable expectation. 34 years is a long time however and like many organisations, during that time CFCCA adapted, changed, rebranded and somewhere along the way lost the essence of this fundamental relationship.

When I started as Director I was determined to bridge the gap that had formed between us, to gain back trust from a community that had founded us but also comprehend how we might understand each other better. Manchester’s China Town is the second largest outside of London, formed mainly of migrants from Hong Kong who moved to the city in the 1960s and 70s. Many came to Manchester with the intention to set up new businesses, make money and return home, although for many this wasn’t the case and now in later life they form the first generation of a rich and vibrant community many of whom are aged 70 and above. 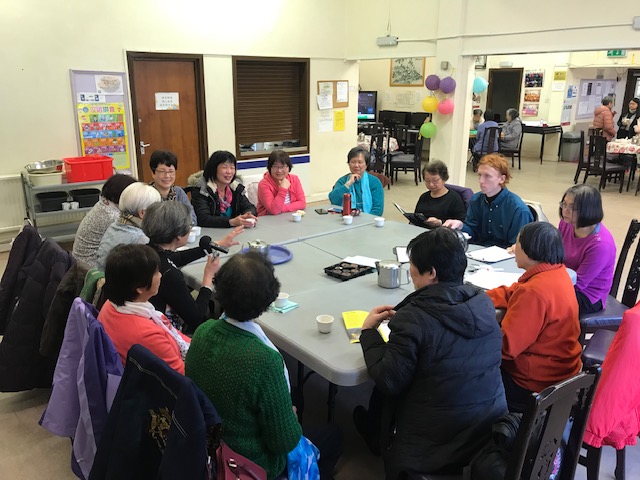 Speaking to other partners and stakeholders across the city it became clear that we weren’t alone in failing to connect with this older minority community on our doorstep. We challenged ourselves to learn more about the barriers they face, particularly around social isolation and to explore how we might use art as a tool to combat these issues.

We challenged ourselves to learn more about the barriers they face, particularly around social isolation.

Our initial research uncovered firstly that the Manchester Chinese community was facing fundamental issues. Increased instances of racial attacks and anti-social behaviour across China Town had left residents fearful to inhabit outdoor spaces such as the central pagoda, with many now using the nearby Casino as a (compromised) social ‘safe space’ to meet because it had security guards on the door. Secondly, we identified there had been very little research into social isolation in older BAME communities in the UK and limited arts or cultural projects focused on this area meaning that alternative understandings and experiences of ageing and social isolation had been ignored. Immediately we saw an opportunity to make a difference but with limited knowledge and skills to do so.

Thankfully, the Baring Foundation recognised the need and our potential to make a change. They backed us to embark on a period of research and development to learn more, test ideas, speak to people and identify how we might make a difference. This support was invaluable as it wasn’t about defining a concrete, shiny project but about testing and trialling, experimenting and researching.

Previous research has shown that individuals from minority ethnic backgrounds are more likely to experience health, social and economic inequalities, increasing the risk of experiencing loneliness and social isolation. At the start of our research we uncovered the alarming statistic that 24% – 50% of older Chinese residents in Greater Manchester reported suffering from loneliness. Recent research into Chinese communities in the UK identifies various contributing factors: distance from social and cultural networks due to trans-national migration, different cultural norms concerning social engagement, language barriers, discrimination and racism. Chinese people in the UK who are 65 and over are reported to spend over 25% of their time alone in comparison to the 5-10% of White British and South Asian older people.

Getting out and talking to our community had to be the first step. We quickly delivered a series of luncheon club consultation sessions with older people, working with the nearby Wai Yin Community Centre where we talked and ate. It was clear from these sessions that food would be an effective driver to bring people together and had real potential as a vehicle to build trust and conversation going forwards. Talking to the group it was clear that language barriers presented a real issue for them to integrate into the city, heritage was fundamental with pursuits such as Tai Chi and Mahjong regularly practised, and that contemporary art was a real challenge. Also, the contemporary China we reflected through artists’ work in our programme wasn’t the China within their reminiscent memory, leaving them disconnected with what we had to offer.

The contemporary China we reflected through artists’ work in our programme wasn’t the China they remembered.

Thinking about the sessions afterwards, it was clear that it was not just us but also the city region that was letting this community down. Language barriers were so fundamental that they had created exclusion and the group were struggling to find anything relevant to their interests and heritage across the cultural sector. This led us to deliver a series of workshops to develop writing and language skills in a creative way. Participants were invited to use creative script writing to tell their life stories which they then shared via the local Sheung Lok older people’s radio station. We also experimented with a fusion of traditional craft with contemporary elements such as traditional Chinese block printing using recycled materials and contemporary images.

We also experimented with a fusion of traditional craft with contemporary elements.

The activities promoted a sense of wellbeing in the participants but actually our objective in delivering them was bigger than this: to use the time of making and talking together to build trust and develop our relationship. Combating social isolation is an organic process that you can’t solve with a single action or activity; it starts with building trusted and meaningful relationships with others, bridging the gap between individuals and organisations, and creating space for communities in a city in which they happen to make home.

The Baring Foundation gave a grant to CFCCA in 2018 to support investigation into how art could tackle the social isolation experienced by the older Chinese community in Manchester.

How has our Arts & Older People programme sought to think about diversity among older people?

Stratford Circus runs regular arts and social clubs for the over-60s in Newham, East London, one of London's most diverse boroughs.