An Artist in Time: Margaret Busby

Baring Foundation
Margaret Busby is an editor, writer, and this year, the Chair of the Booker Prize judges. She was also interviewed in The Artist in Time, commissioned by the Foundation, which celebrates the lives and work of artists born before 1950.
Arts

This interview is published in The Artist in Time: A Generation of Great British Creatives by Chris Fite-Wassilak, with photographs by Ollie Harrop (Herbert Press 2020). More details about the book below. You can hear Margaret talk about her work and her experience of the COVID-19 lockdown at a virtual launch for the book held on 28 October, recorded here.

Busby became the UK’s youngest and first black publisher when she co-founded Allison & Busby in 1967. She went on to be editorial director of Earthscan, and since the early 1990s has been a freelance writer, broadcaster and editor. In 1992 she edited the influential anthology Daughters of Africa. In 2019 she received the Africa Writes Lifetime Achievement Award from the Royal African Society. 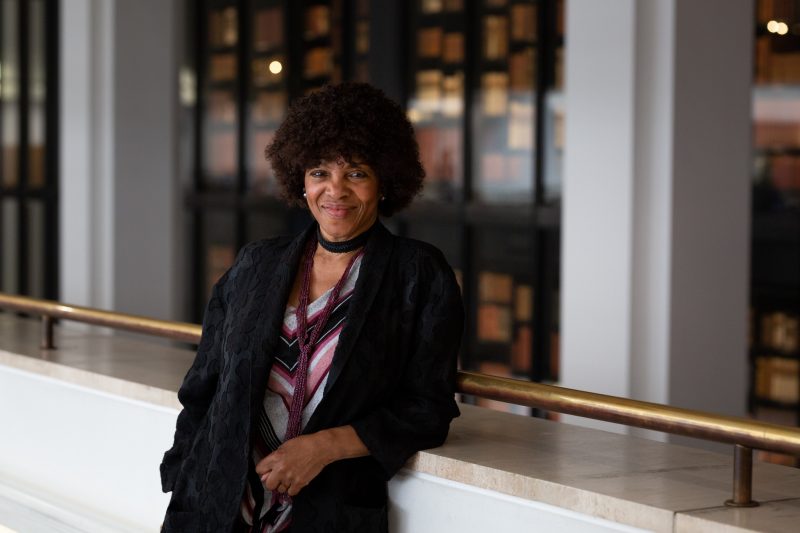 When you’re young, you’re idealistic and think: ‘The world ought to be like this,’ or ‘Why don’t people do that?’ There may be all sorts of good reasons why those things haven’t been done, but you’re not old enough or experienced enough to be put off. So you decide, ‘Well, this is what I’m going to do, because I believe in it.’ Allison & Busby, the company I co-founded, was conceived while I was at London University. I met this other student called Clive Allison at a friend’s party – we chatted, discussing what we might do when we graduated. We were both interested in poetry and we thought, ‘Why don’t we start a publishing company?’ So, long story short, we did. We started with three poetry books, cheap paperbacks that young people like us could afford. We didn’t know how many copies to print, so we ended up with 15,000 poetry paperbacks and no distribution. Our distribution was stopping people in the streets: ‘You want to buy a book?’ That’s how we started. We published whatever we wanted to, books we believed in, things that nobody else was doing. We didn’t know any better. Someone once said to me: ‘You never knew what A&B was going to publish next but you knew it would be interesting.’

I was always interested in writing, literature, words. The first words I remember learning to spell, at the age of four, were ‘necessary’, ‘fascinating’, and ‘picturesque’. To me, that sums up life: necessary, fascinating and picturesque! 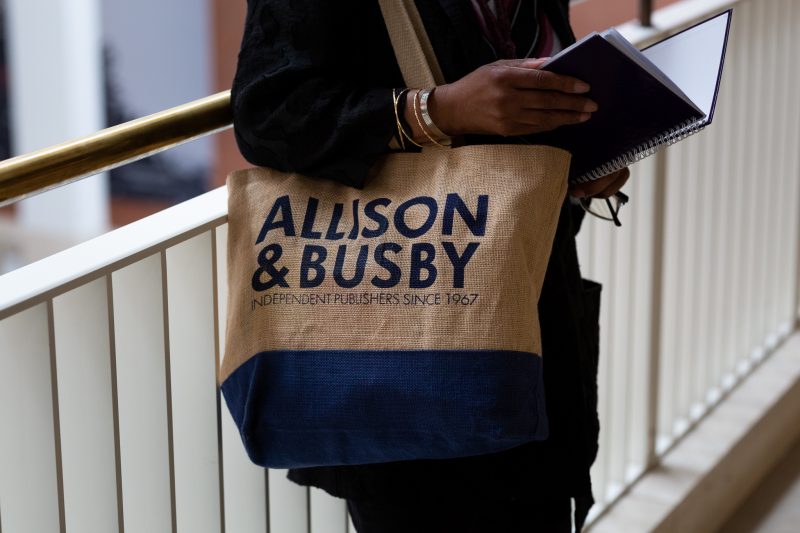 Editing is a strange skill. If you’re a good editor, and do your job well enough, nobody knows you exist. People will just praise the book, and praise the author. Having a close relationship with writers, you hope to see them develop and get better and better. That’s part of the joy of being an editor: it’s not an ego thing. You’re not seeking personal acclaim, even though you may play a part in steering a writer towards success. It’s a bit like being a midwife. One writer I worked very closely with was Buchi Emecheta. We were both young African women in London, and there was not much that reflected us in the literary world. She was a great storyteller, and she had a lot to overcome in terms of her personal life, but she trusted me when it came to editing, and I would retype her manuscripts, incorporating the changes. Editing is something I can’t help. Whenever I read a newspaper, I seem to spot every typo, every misplaced comma or apostrophe. I enjoy helping people say what they want to say in the best possible way. Why wouldn’t you want the world to be full of wonderful writing?

Editing is a strange skill. If you’re a good editor, and do your job well enough, nobody knows you exist.

Writing my own material is a different sort of project. I’m a late-night person, and I love to hear music as I work – quite a lot of jazz, but it can be anything. I don’t have a dedicated office, so when it’s cold, my bed, with my laptop, is my office. One of the things I’ve learned about myself: if I have to write something by the end of the month, I’ll probably do it the day before the end of the month. Writing close to a deadline can be a good way of focusing; I guess it’s to do with first recognising what you want to say and then making sure you’ve said it. But for me also the writing process often happens as I’m doing other things. While I’m shopping, it’s going on in my head. I walk a lot, yet I’m writing. There may be no written evidence for weeks, but actually I’m constantly rehearsing it in my head so that when I pull out the computer, I’ve mostly written whatever it is. I’ve also got this mindset where I write something that you or anybody else thinks is fine, but once it’s in print I realise there’s one word in it I should have changed. I interviewed Maya Angelou twenty-five years ago for an article in which I used the word ‘happy’ at one point where I still wish I’d said ‘blissful’. Now, who else gives a damn? But for me somehow it’s a detail that nags.

But for me also the writing process often happens as I’m doing other things. While I’m shopping, it’s going on in my head. I walk a lot, yet I’m writing. 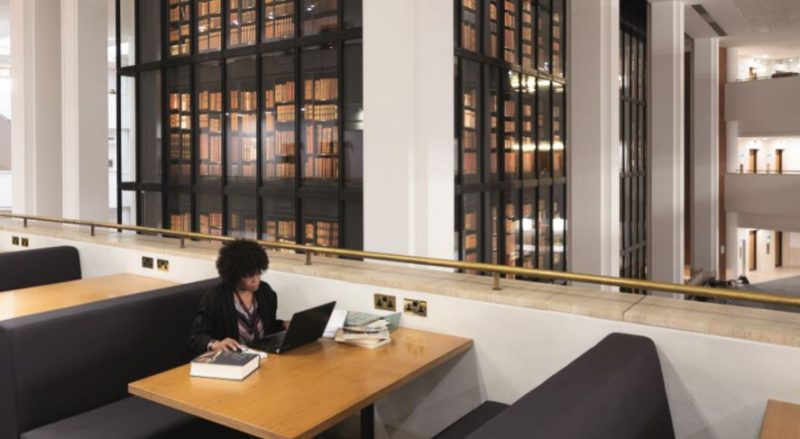 I am keen that history doesn’t get lost. Archives are important; archives are people’s memories. There’s truth in that saying: ‘When an old person dies, it’s like a library burning down.’ Sometimes it’s simply a question of preserving or rescuing those sorts of histories and memories. Things that help us go forward because we can see where we’ve come from. I got here because of my father winning a scholarship and studying by candlelight so he could save money for his siblings’ education. Because my mother had to save money for her children’s school fees, at one point she had only one dress, which she’d wash at night and wear the next day. All those sacrifices contributed to my being here. It wasn’t that I’m such a brilliant person that I did it all on my own. I didn’t. One of the things I do, and think everybody should learn to do, is edit Wikipedia. There are so many gaps in information about historical events, books, films, artworks, artists, notable people in many spheres. If you search for something and there’s no Wikipedia entry, it’s as if that person or thing is not important. So whenever I have time and can do a bit of research, I at least start an entry to help remedy that absence, particularly of women. I like that sort of democratic approach to information. We each have different knowledge, things that we have lived through or have witnessed, that we can share with the world.

There’s truth in that saying: ‘When an old person dies, it’s like a library burning down.’

Those are the things that contribute to each of us being where we are. And we have to ‘pay back’, in some way, and pass things on. We can each recognise that somebody, perhaps, gave us the opportunities or the inspiration at some time to do something more than we could have managed by ourselves. We didn’t do it all alone. That’s the sort of creative writing that I’m now gravitating towards: to reclaim some of those histories, stories, themes; things that propel us forward, that make us do something tomorrow that we haven’t yet done.

We can each recognise that somebody, perhaps, gave us the opportunities or the inspiration at some time to do something more than we could have managed by ourselves. We didn’t do it all alone. 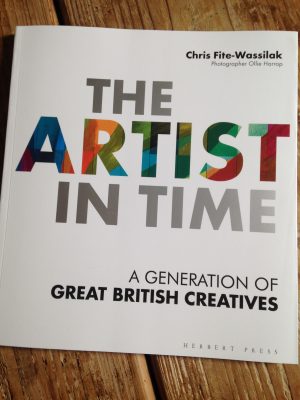 The Artist in Time is available from the publisher, Bloomsbury/Herbert Press, and from all good bookshops. If you’re a grantholder of the Baring Foundation’s Arts and Older People programme, we will be sending out copies when we are able to.